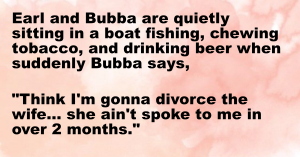 Earl and Bubba are quietly sitting in a boat fishing, chewing tobacco, and drinking beer when suddenly Bubba says,

“Think I’m gonna divorce the wife… she ain’t spoke to me in over 2 months.”

Earl spits overboard, takes a long, slow sip of beer, and says, “Better think it over… women like that are hard to find.” 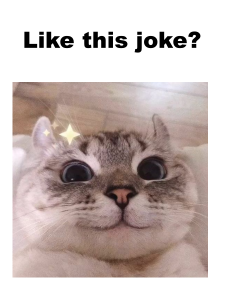 A man got fired from his job 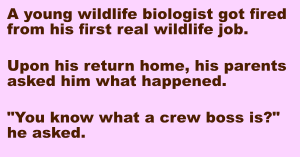 A young wildlife biologist got fired from his first real wildlife job.

Upon his return home, his parents asked him what happened.

“You know what a crew boss is?” he asked.

“The one who stands around and watches everyone else work.” “What’s that got to do with it?” they asked.

“Well, he just got jealous of me,” the young biologist explained.

“Everyone thought I was the crew boss.” 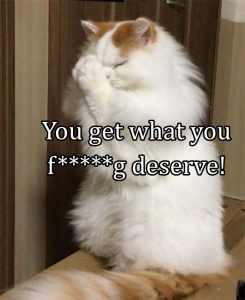