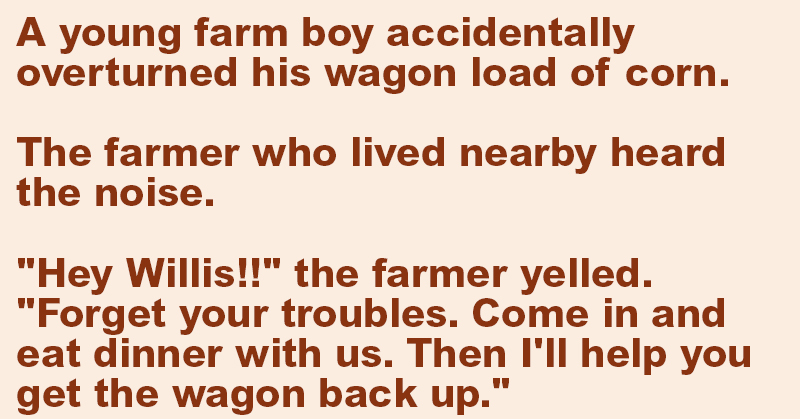 The farmer who lived nearby heard the noise.

“Forget your troubles. Come in and have dinner with us. Then I’ll help you get the wagon back up.”

“That’s so nice of you,” Willis replied, “but I don’t think Dad would like me to.”

“Nonsense, come on!” The farmer insisted.

“Well, okay,” the boy finally agreed, “but Daddy won’t like it.”

After a hearty dinner, Willis thanked his host. “I feel a lot better now, but I know Dad is going to be real upset.”

“Don’t be foolish!” the neighbor said with a smile. “By the way, where is your Pa?”

“Under the wagon,” Willis answered.

A 15-Year Old Boy And His Father Were In A Mall. 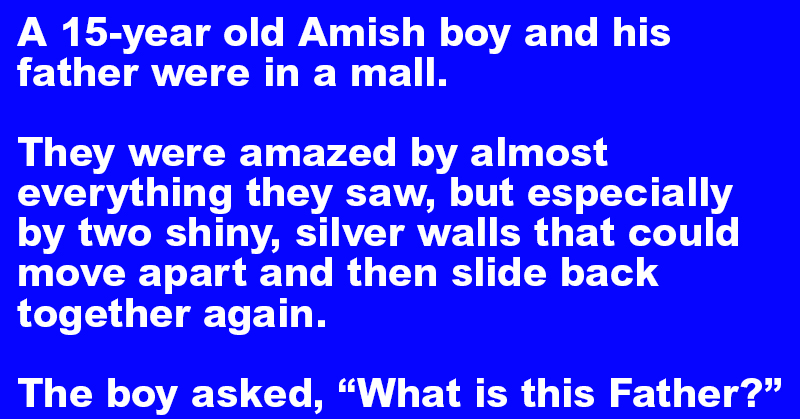 A 15-year-old Amish boy and his father were in a shopping mall.

They were stunned by almost everything they saw, but especially by two shiny, silver walls that could move apart and then slide back together again.

The boy asked, “What is this Father?”

The father (who had never seen an elevator) replied, “My son, I have never seen anything like this in my life, I don’t know what it is.”

While the boy and his father were watching with amazement, an old lady moved up to the moving walls and pressed a button.

The walls opened and the lady walks into a small room between them.

The walls closed and the boy and his father watched the little numbers above the walls light up one by one.

They kept watching until it reached the last number, then the numbers began to light in the reverse order.

Finally, the walls opened up again and a beautiful young woman stepped out.

The father, not taking his eyes off the young woman, said quietly to his son… “Go get your Mother.”

Hope this joke will make you smile! Have a nice day!