Teach Me Life
Home Lifestyle A woman named his child 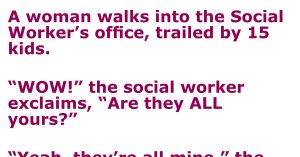 A woman walks into the Social Worker’s office, trailed by 15 kids.

“WOW!” the social worker exclaims, “Are they ALL yours?”

“Yeah, they’re all mine,” the flustered mother sighs, having heard that question a thousand times before.

She says, “Sit down Terry.” All the children rush to find seats.

“Well,” says the social worker, “then you must be here to sign up. I’ll need all your children’s names.”

One by one, through the oldest four, all boys, all named Terry!. Then she is introduced to the eldest girl, named Terry!

“All right,” says the caseworker, “I’m seeing a pattern here. Are they ALL named Terri?”

“Well, yes – it makes it easier. When it is time to get them out of bed and ready for school, I yell, ‘Terry!’ And when it’s time for dinner, I just yell ‘Terry!’ and they all come running…. It’s the smartest idea I ever had, naming them all Terry.”

“But what if you just want ONE kid to come, and not the whole bunch?” the caseworker asked

“I call them by their surnames.” 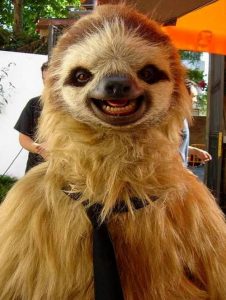 In their own way. LoLLL.

We hope you like this joke, have a nice day!

A man reported his stolen credit card to the police

A blonde, a brunette, and a redhead walked into a bar for a drink.

Three man all walk into a pub with their wives

One day, Jimmy was walking down Main Street

A wife asked her husband to go shopping for her

A young man was walking through a supermarket

Find the emoji that stand out in this pic!

What About The Kids?

Only genius can find all the differences in this pic!

A man reported his stolen credit card to the police

A blonde, a brunette, and a redhead walked into a bar...

Three man all walk into a pub with their wives